Every painter paints himself .... Automimesis 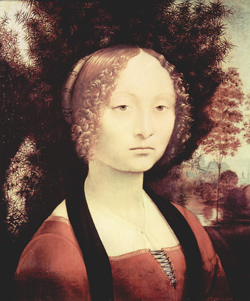 Gaspare Visconti, the Milanese court poet, has according to some experts accused Leonardo Automimesis in one of his poems. This refers to the problem, also realized by Leonardo, that every painter inevitably projects a piece of his own ego into his work like similarities with the painters self in the portrayed figures.

Leonardo himself has repeatedly pointed out in his treatises that such self-imitations are to be avoided. Scholars of the history of the arts derived out of this the theory that Leonardo had an aversion to any kind of self portrait.

"Formerly there was a painter who could draw nothing but a cypress tree,
According to what Horace tells us where he teaches us to understand poetry.
There is one nowadays who has so fixed in his conception the image of himself
that when he wishes to paint someone else he often paints not the subject but himself.
And not only his face, which is beautifully fair according to himself,
but in his supreme art he forms with his brush his manners and his customs."

These lines are interpreted as Visconti deriding Leonardo, explicitly accusing him for self-imitation.

But if one has all the elements of the Lady with an Ermine in mind, these seemingly polemic lines are suddenly turning into a hymn praising the work of Leonardo da Vinci. His outstanding abilities allow the artist not only to paint his own face in an appropriate manner, but also to present his creativity