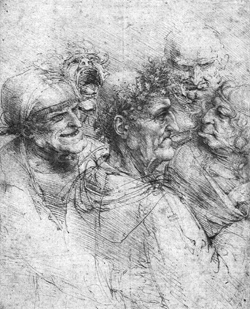 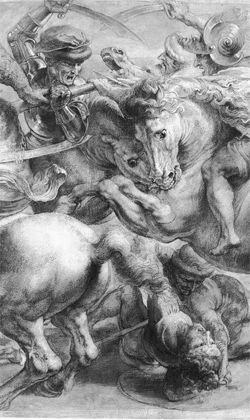 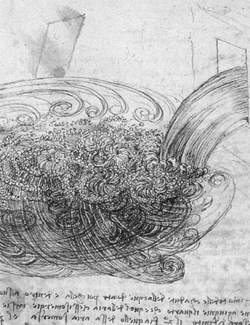 Prosopagnosia means the inability to recognize faces. Face detection is a fundamental human capacity helping us for example to distinguish friend from foe. Through human evolution this ability deeply stored conscious and unconscious perception.

Therefore we are all able to recognize in structures like clouds images or patterns such as "Faces"; particular elements like a "nose", a "mouth" or "eyes" are combined and identified in an overall impression.

Wherever light and shade shapens a given object with ligth and dark areas, our brain seems to scan these for meaningful and familiar patterns just like in a puzzle. Thereby face recognition is undoubtedly one of the most important mechanisms for the survival of social communities since time immemorial.

Leonardo da Vinci obviously used and worked with this mechanisms in visual perception in his numerous sketches of the "grotesque heads". These are regarded as precursors of the cartoons and they probably served Leonardo for testing or preparing special effects, which he used in his works - such as in the famous fight scene with riders in the "Battle of Anghiari." It is also not unlikely that the creation of such special effects was a professional discipline of Renaissance craftmansship.