A self-portait in Cecilias Drapery ... 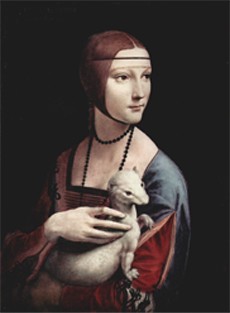 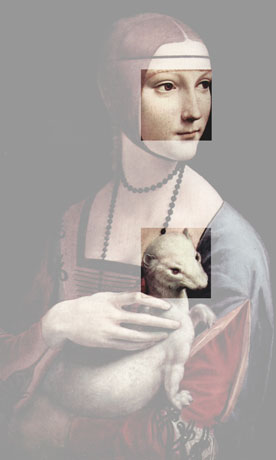 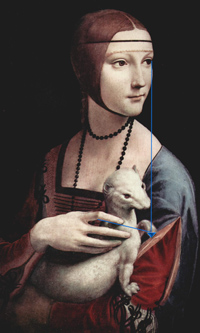 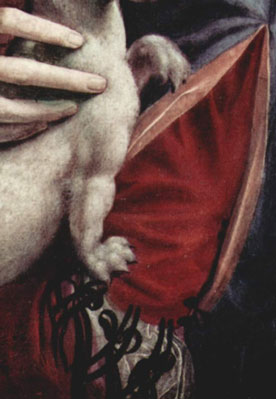 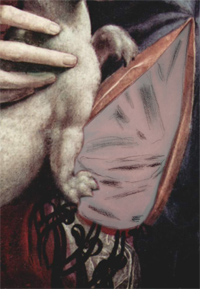 Visions & Imaginations
A Renaissance-Face on a visit in Berlin. And no one saw it ...!?

Max Ernst spoke about an "unbearable vision" that gave him a new understanding of the methods and the functioning of Leonardo's art. Sigmund Freud pointed in a footnote of his "childhood memories of Leonardo" to a similar imagination in the "Saint Anne Selbdritt." And possibly Walter Pater as well refered to unusual, perspective experiences when he writes in dark, cloudy words about the Mona Lisa:

"She is older than the rocks among which she sits / like the vampire, she has been dead many times, / and learned the secrets of the grave / and has been a diver in deep seas, and keeps their fallen day about her"

What exactly, one might ask, have these unique cultural heroes seen in the paintings of Leonardo? The artist himself gives us concrete evidence in his instructions for professional painting:

"And that garment should be draped in the way, that it does not look empty, meaning that it should not look like a drapery not being used by any human being; as one sees among many other pieces of art where drapery is beloved and used with so many different shapes and the individual figures are full of folds - thereby forgetting the effect ... "

No Leonardo expert in art history can credibly avoid making drapery and garment presentation a subject. At some time all have focussed their attention to this field of nature-orientated reproduction - besides the truly countless other fields, any art historians may actually not be able to exist without. But somehow it seems that they missed the irony in Leonardo's texts in a way or the other.

"Do not reveall it when you dear freedom, because my face is a prison of love," wrote Leonardo himself cryptically and misunderstood to the present day, almost exactly at the same time when the Lady with an Ermine took shape. One can be sure that he only wanted to frigthen and terrify his contemporaries with this threat because he wasn't sure himself whether this experiment about perception and the "componimento inculto" - the unenriched draft - would work the way he expected it. However - and this is one of the many interesting questions - it may actually not be that no one else since 1492 had the same visual experience examining the lady with ermine, which is described below.

When there ever was a ture expert in all relations of human proportions, then it was Leonardo. He planned his pictures with mathematical precision- measuring every detail exact until the tips of fingers and toes, trying to create new perspectives based on the ideas and parameters of his idols such as Alberti and others. Of course, the so called "old" as the ancient Greek thinkers were known in humanist circles, were in his mind. Vitruvius, Ovid and Euclid can be mentioned as examples (the keyword is: reception of antiquity). Intelligent allegories and allusions were en vogue at that time. As already mentioned, for Leonardo the most important part of human cognition was the visual sense by which a person appropriates the world and experiences it. Ergo, the eyes are focussed and of special meaning in his portraits.

And this is where he is so meticulous that it is fun to follow the optical, ambiguous clues. (This even works without infrared cameras, spectral analysis and radiocarbon dating - you just need the eye on the right place ...)

Some writers and interpreters of the painting have assumed that someone outside the picture as a "third person" is addressed indirectly by the sight of Cecilia and the ermine. To Ludovico Sforza, Leonardo's client, the charmingly reckless eyeblinck is addressed, by his mistress of that time. That may be, but this message was arranged just for him as a client and the public at the court. The foremost duty of the direction of the lady's view is to detract from the main character of the picture. This one is looking in the same direction as the animal and the lady (a further indication of Leonardo's intention)!

The eyes themselves show us the way

The two most important elements in the picture are the exactly arranged faces of Cecilia and the ermine. They are catching the entire attention of the viewer directly. Leonardo placed these two key elements in a vertically proportional position (on the left indicated by the picture with the two squares).

Drawing down a line from Cecilia's left eye to the nose (!) of the ermine, its extension comes to the strange-looking paw of the animal pointing downwards. The forefinger of Cecilia's right hand - a further hint by the artist - points onto the same part of ​​the image. In contrary to the direction of the view of the two protagonists there are deictic indications to another "element" in the image that the viewer does not get aware of immediately.

What exactly is denoted by the ermine's paw so obviously pointing downwards? It seems that it wants to draw attention to the red garment in the left upper arm of Cecilia. Here are the typical folds of the dress enabling the interaction of light and shadow to which Leonardo payed so much attention in his manuscripts. A drape "where no man lives" was an abhorrance for him as we mentioned above

Taking this statement literally - one can detect a face being covered by a dress, a cloth or a piece of garment. It is the "nose" in a prominent position under the garment that indicates the presence of a face. (Think of a masked person, for example a bank robber, who pulls a wool cap or a hood into his face in order to hide his identity.)

We now claim that the ermine with its left paw directly points onto the nose being covered in the described way. With the right paw the animal is holding itself up from the also well represented chin right on the lower side of the mask. Directly above, the mouth of a male's face seems to smile wryly. Only the eyes are not represented directly - the left eye is slightly indicated by a deepening in the depiction of light and shadow. The result is a by Cecilia's dress completely veiled face. Anyone can after a short time identify it as a face with a nose, a mouth, a chin and a part of the left eye. Once identified and made conscious it is almost irreversibly held in visual memory.

Because with the "brush he formed his habits and customs". And maybe he's sneering at his contemporaries, whom he could prove by his art, to what an artist is capable.